John’s 1963 Ford Falcon was one of the first large show quality builds that LIS Audio did. He had a great deal of trouble finding a reliable and trustworthy shop that could give him what he wanted within is budget. After searching for some years this complete audio build has been rooted to LIS Audio. We are proud to show this vehicle off at every show the it attends, including the Kansas City World of Wheels Car Show and the most recent KC Showdown Car, Bike & Truck Show. Keep an eye out for this beautifully custom built handcrafted piece of machinery! 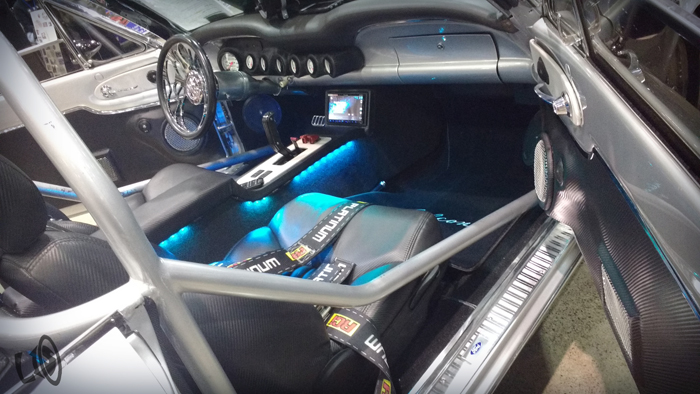 The Ford Falcon on display at the Kansas City World of Wheels car show.

Before we had a storefront we were doing many installations mobile and on site. John had been working with Co-owner Cameron performing the build while on the side of his full time job, and it became an LIS Audio build as soon as the company was started between him and fellow Co-owner Justice. This was a pretty extensive build incorporating a full entertainment system with a lot of additional custom fabrication work!

The 1963 Ford Falcon before when John first got the car to 12 plus years later all finished up. 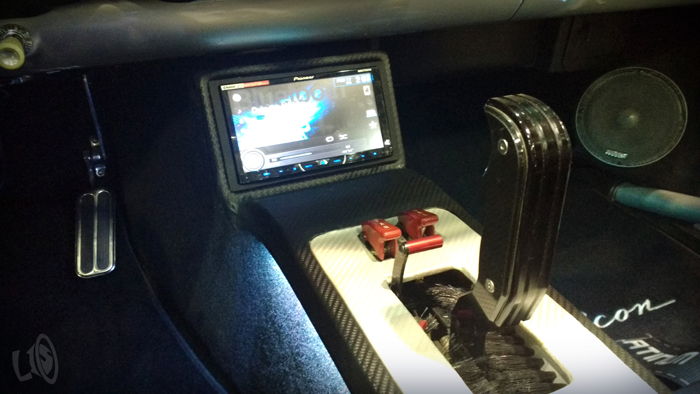 It all starts with the custom center console that home the Pioneer Touchscreen stereo, along with a few switches and lighting accents. The gauge cluster that you see in the pictures is 100% custom fabricated and uses 0 screws to mount to the dash. The entire interior of the Falcon has been replaced with carbon fiber textured vinyl. The two custom door panels hold a set of 6.5” Alpine Type-X components speakers, with a second pair that are built into the kick panels of the car. The front stage screams!

The custom built gauge cluster was made from fiberglass and also incorporates the brights and blinker lights, as well as the bluetooth mic that goes to the Touchscreen.

Under the rear of the Falcon showing the insanely built rear differential, suspension and fuel system components.

The street rod is tubbed in the rear to fit the giant wheels and rear racing differential setup. Since there is no back seat and the roll cage gets in the way of any passenger seating, we decided to tuck the amplifiers and subwoofers behind the front seats. We built custom sub enclosures behind the seats firing forward to get the best combination of quality and output in the naturally loud convertible Ford. We placed the amplifiers toward the top of the rear area in windows so that they are visible while at a show. John wanted to add a storage compartment for an old school tin Ford cooler to the build, so we made a hideaway compartment in the center of these two areas the make it s easy to access the cooler.

The motor of the Flacon before and after being fully built with Procharger super charger.

The fuel cell and battery bank that have all be relocated to the trunk.

The subwoofers the John had on hand already were two 10” JL Audio W6 series run off of a 1000/1 JL Audio Slash series amplifier. The 300/4 JL Audio Slash series amplifier is what we have powering the two sets of components speakers. We also added a second yellow top Optima battery in the trunk near the fuel cell with some additional JL Audio wiring to beef up the electrical system even more. Birch wood was used to build all of the custom interior panels and bracing to conserve weight while also remaining lighter than most other materials used to construct custom panels. As you can see we also use our custom grille pressing techniques to cover and help protect the audio components we installed.

The two 10 inch JL Audio subs in custom built sealed enclosures just below the amplifiers with the cooler hiding between.

Some more before and after pictures of the build from start to finish.

The difference in change not only in the interior but to the dash alone is amazing.

We added LED Glow kits to the interior of the vehicle accenting a lot of the custom panels that were build to fit. This Falcon has won a ton of awards from any different shows and its still going. Since we first finished the build in 2016 to now its been to more than 15 shows with solid podium wins in its category as well as wins for other sub category votes. We love having Johns Falcon at any event or show we attend or exhibit at! You can catch it every single year at the World Of Wheels car show at the Kansas Cit Conventions center in February. Watch our videos to see more!

Thank you for reading our blog! Make sure to follow the LIS Audio Blog to see which ride we will be our November feature!!

This Lexus recently came in for a full stereo system upgrade!
Check out this simple installation that made a big difference to this Malibu's stereo system.
This GMC recently got a sub amplifier installation overhaul. The initial installation was not performed by our shop and the client complained of the amplifier randomly shutting off.
Next year we may need more wall space for certifications and awards... It's one of those "good problems."
This 2009 BMW X5 recently got a sub-stage upgrade. We added a JL Audio 13" W7 and 1000 watt amplifier to run it. This vehicle now has some really nice bass! #LISaudioKC
Check out the new custom sub-stage in this Cummin's we just built and installed at LIS Audio! This truck really pounds now! #LISaudioKC